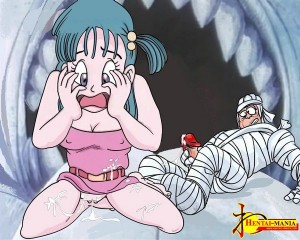 A young slut was walking by the remnants of the once great pyramids. She hasn’t had yet enjoyed the ancient views, when she was attacked from behind. A scary mummy threw the girl on her back and spread her convulsing legs, after which a huge dong appeared from within his bandages and made its way into her tiny pussy.
«Never been fucked by a mummy before», thought the girl, as she didn’t in the slightest resist such a rough penetration. Had only the mummy knows, what an insatiable slut the girl was, it would probably run away screaming instead of trying to screw the lass. After several unsuccessful attempts to stick his dong in, she raised herself on the elbows and said: 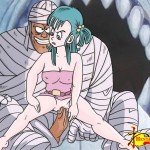 “I know that you’re ancient and have already forgotten how to fuck, why don’t you let me do the job instead?” She stood up and went on “Just sit down, big men, I’ll show you how it’s done in the 3rd millennium.” The mummy set down and the young slut jumped straight on his huge bandaged dong. The whole shlong of his disappeared quickly in her hungry pink as she banged herself against it zealously, being the horny toon girl who hasn’t had a decent fucking in a week. She kept riding him until the very peak, when his load blew her off his dick as gallons of sperm, which have been building up for eons, shot from his Scorpio King. She did the job perfectly and seeing that his once massive jerk no longer showed signs of life, she fixed her skirt back and headed further into the forsaken city to find some more fun.